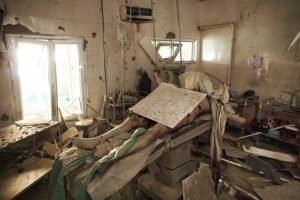 “The Man on the Operating Table.” A patient, later identified as 43-year-old husband and father of four, Baynazar Mohammad Nazar, lies dead on the operating table inside the Médecins Sans Frontières Kunduz Trauma Center in Afghanistan, following the 3 October attack by an American AC-130 gunship. © Andrew Quilty.

‘US forces conducted an airstrike in Kunduz city at 2:15am [local time] on 3 October against individuals threatening the force. The strike may have resulted in collateral damage to a nearby medical facility. This incident is under investigation,” said Col Brian Tribus, spokesman for international forces in Afghanistan.

We are all collateral damage.

We are gutted, gutless,

cowering in a lousy rut,

in a dirty, visceral corner.

some restraint, some insight

into what we have become.

Step back and look

at this cracked, demented earth.

Enough grovelling in the charred shadows!

Let the rains of Arcady bathe