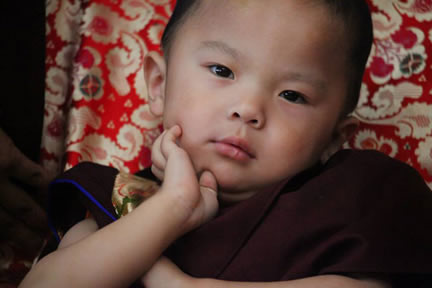 others laze on the river bank
their ears de-waxed, their toe-nails clipped,
I walk on, not wishing to know what happens

drinking maofeng cha by the river,
Mr Fu Ling, travel agent, knows the river since childhood,
‘Happens all the time on that bridge,’ he says in text-book English,
‘many people cannot make ends meet’

dusk
up the steep hill
in black rain and sleet

in a gaudy, up-market Tibetan restuarant
Gesang, a young Tibetan woman from Bathang,
is now doing ‘social work’ for the government,
2 years ago, she was less sophisticated, less plump

her Tibetan fiancé studied law in Beijing
now a prosecutor, he has no time for Tibetan Buddhism,
especially the monasteries, the endless rituals,
prostrations and whirling of prayer wheels

buckwheat tea, buried under blankets
in the minus 5 degrees cold

boiled egg and sweet bun, then climb past
raucous, cajoling minibus boys,
up the steep hill to the gompa overlooking town,
to the refuge of the dukhang,
the maroon drone of sutras,
chanting, eating, chanting, bits of food scattered
on the threadbare carpet

downtown, harsh wind of evening,
past the beggars, past the dogs,
past the omniscient river

in heavenly sunshine, in Den gompa,
Nagpo Chenpo, (Mahakala) resides in malevolent splendour
Time, all-consuming time
not to be messed with

on a 4800 metre pass, the packed minivan is not equipped
for an icy road, snow chains secured with rope

all is white
a thin line divides mountain from sky

a Tibetan teenage girl in the front passenger seat
has commandeered the cassette player, she plays
10 seconds of each song in a playlist numbering
thousands of songs
hundreds of hairpin bends

all is black
black mountain

in the gompa complex, high above town,
I am looking for a 4 year old boy, at least
he was 4 when enthroned in Pelyul the previous year,
Pema Norbu, the 4th Yashi Rinpoche tulku

I have his face on my phone
people nod knowingly and point to distant hills,
‘he is this way’, ‘that way’,
I run out of paths to take
with no sign of Pema Norbu

tracking the majestic Dri Chu,
its serpent tributary Bei Chu
my driver, nervous of avalanches,
does not stop for the Om Mane Padme Hum inscribed
on rock walls, in giant harlequin characters

all my life I have wanted to love death

Chou En Lai protected this monastery from destruction,
a rare reprieve in the 1960’s,
on behalf of Ngapo, a Tibetan of high rank,
a collaborator in the so-called ‘liberation’

bitten by a dog, flailing,
Dondup, a cook in a whaler’s coat,
takes me on his arm to his canteen
he gives me a paper beaker of hot water,
momos,
the dignity of shelter

in the main gompa, below the shedra
the watchman, his face emblazoned
with a purple scar the size of Tibet,
slowly hacks bits of gristle from a yak’s leg bone

a candle burns
two senior monks ignore me with faint sneers
‘what in hell is this Westerner doing here in Palpung,
in this kitchen, in this snowstorm?’
maybe I am imagining this
all this

the light fades, the snow falls,
the dogs begin their ferocious barking marathon

past chorten rows and an empty shedra
looking east to Dzongsar,
there is no one around

walking higher, seeking the elusive kora path
in stunted, windswept vegetation
it is auspicious to walk the Palpung kora this year
the Year of the Goat

out of nowhere, high up I meet
a monk in orange robes and a wizened woman with no teeth,
she beckons me to join them on a kora,
to share the sacred sites

I seek the succour,
the sanctuary of Dondup’s canteen,
on cracked mud walls,
grubby posters of the 17th Karmapa exude
transmission and grace

sprawled in juniper shrub
under a seared sky a storm threatens,
the scant diet, altitude and foreboding gompa
have peeled me to the bone

at night, in the gompa, the watchman
offers hot, salty water and rock-hard bread,
‘Tomorrow I’m going to Dege’ I say proudly,
having memorised a few phrases in Kham dialect

the kettle hisses,
he nods sceptically,
‘gari?’, he asks, the bright purple scar glaring
‘have you got any transport?’

back at Dondup’s, lunch time, the novice monks joke,
banter, play Tibetan pop music on their phones,
one or two read books Dondup is selling,
books by a certain Akong Rinpoche,
founder of Samye Ling with Chogyam Trungpa, 1967
murdered, Chengdu, 2013

I knew Akong,
Dondup knows,
we glance for a moment, acknowledging
the death of a master

I say goodbye with respect, with urgency,
another night in Palpung is too hard

for days, I walk repeatedly to the Dege Parkhang
to walk the kora around the revered printing house,
past the Traffic Police, rowdy Chinese school children,
the Tibetan medicine shop,
along the boarded up Gesar Jie,
the China Mobile shop (maybe a wifi connection),
past the welding shop, hordes of sleeping dogs,
past bent old ladies carrying curved Horpo daggers,
proud, erect Tibetan women, laden
in turquoise and amber

striding the four walls of the Parkhang
with the young and old, the weak and strong
is like being a fish in the ocean
total acceptance
total heartbreak

wild rose, willow and potentilla
on the slopes of Yilhun Lhatso
a lake of invincible blue
picnicking with Marc, Dutch engineer
a chance encounter at Dege bus station

at Dala Gong, a mare and her foal
graze along the gompa walls
Tjapa, the head monk, offers tsampa and salted black tea

he remembers being cradled by his mother,
the Dalai Lama tapping his head
as he passed through the village in 1955
on the ill-fated journey from Lhasa to Peking
where, after bluffing for days, Mao Ze Dong casually remarked
‘religion is poison’

in symphonic mood, at peace,
drinking instant coffee in the village store

the village store is crowded with locals, faces
sagging with age, creasing into grins,
staring into a watery space,
they were little children when the PLA marched and pillaged
on their way to Lhasa

early evening at Dala Gong
eating noodles and spring onion with two young Tibetan boys
watching Chinese cartoons on TV,
in the blue-green air
Tjapa comes out to caress the mare and foal
and feed them grass

Tjapa’s cabin before dawn,
a breakfast ceremony in sign language and silence

the minivan to Sertar is inevitably packed,
a monk, a Tibetan couple, a young Tibetan mother and her child
a teenage Chinese girl who sleeps throughout
her head rocking like a doll

the young mother offers me a biscuit
she is desperately poor, vulnerable
with chaste courage she holds
her baby boy to her breast
as if he is the messiah

like a mirage, Larungar
emerges from the barren landscape
40000 monks and nuns living on three hillsides
a crimson mosaic of scrap metal and wooden boxes
crammed with humanity, unimaginable biographies

above Larungar
an ascetic wind hurtles across treeless summits

the drive south, propped up against
a burly yet gentle Tibetan, taciturn
unless talking to a young, cheerful Chinese girl beside him

in Tagong, the light is lead grey
in the gompa, a photo of a Kham master
illuminates a dark corner,
Chokri Lodyo, died Sikkim 1959,
in the ‘sleeping lion’s posture’

in the guest house, Ed, an American
flying-doctor pilot, tries to light a yak-dung fire
‘I’m leaving tomorrow for Chengdu’, he says,
‘Tibet hurts my lungs, my guts and my heart’
‘What do you do in Chengdu?
‘Find a Chinese woman to marry’ he replies,
I snort, not even asking why

a faint tremor from Nepal, 2000 kilometres away
trembles the building, the lady
who hosts the guest house, a TV addict
runs hysterically into the square
‘Was that an earthquake?’, I ask.
‘It kinda felt like one,’ Ed muses
we pause, eyes locked in a cool embrace
‘I’m leaving tomorrow for Chengdu too’, I say

the Jin Jiang river is home
the heart is home

Glossary to the Kham Diary

* maofeng cha a famous green tea
* sutra in Sanskrit ‘thread’, now implying traditional scriptures
* Nagpo Chenpo (Tibetan) Mahakala(Sanskrit) in Tibetan, the Great Black One, literally in Sanskrit ‘beyond time/death’
* tulku a reincarnate custodian of a specific lineage
* Jataka popular stories of the former lives of the Buddha
* tsampa and momos Tibetan staples, roasted barley and steamed dumplings respectively
* chorten a mound-like structure holding offerings and precious relics
* kora circumambulation of sacred places, buildings, which can take many days or months or a few minutes
* 17th Karmapa the current head of the Karma Kagyu school, one of the 4 main schools of Tibetan Buddhism
* Samye Ling the first Tibetan gompa in the west, founded in Langholm, Scotland in 1967 by Akong Rinpoche and Chogyam Trungpa
* shong a village in the valley below a monastery
* Dege Parkang most Tibetan scriptures have been printed here for centuries
* torma figures made of flour and butter used in tantric rituals or as offerings